This site uses cookies to provide and improve your shopping experience. If you want to benefit from this improved service, please opt-in.
More Info
Save Preferences
News | first4magnets.comBusiness NewsFirst4magnets to help 1,000 young people spread the word about foodbank services
Menu
Business News

Over 1million people used foodbanks in the UK last year, that’s one in 64 people who without the help of charitable foodbank donations, would have not been able to feed themselves or their families. When The Sulgrave Youth Club in Hammersmith reached out to the team at first4magnets for assistance with their youth-led awareness raising campaign, we were only too happy to help.

Senior Youth Worker, Poonum Chamdal from The Sulgrave Club contacted first4magnets to explain: “For the past three months, our members have been running a food collection project (funded by the Jack Petchey Foundation and The Eggless Cake Box) in partnership with Hammersmith Academy and Hammersmith & Fulham Foodbank. A group of 12 16 and 17-year-olds have been working tirelessly to build their own knowledge, generate awareness, organise food collections, create a documentary, and raise money for the Foodbank.

“One part of the project culminates with the youngsters producing a pamphlet that provides details of local services, including foodbanks, which can help people in financial difficulty, particularly at this time of year. The leaflet produced will be given to and taken home by 800 pupils of Hammersmith Academy, and 200 members of The Sulgrave Youth Club, before they break up for Christmas.”

The young people who created the leaflet wanted to find a way to make sure their message stuck, literally, which is when first4magnets were asked to help. The youth club members had the idea of attaching a magnet to the leaflet so that it could be taken home and attached to the fridge should the family need the details of any of the services listed. Ryan, the young man responsible for the design of the pamphlet commented “being able to be part of the food collection project has been so rewarding, I’ve been able to use the graphic designs skills I’ve learnt and developed at The Club to better my community! The magnet addition really does ensure that the pamphlet doesn’t get stuffed in a cupboard somewhere. Such a small thing will make such a big difference!”

David Gault, Sales Director at first4magnets added: “As soon as we heard from Poonum and her team of organisers, we were desperate to help. Our contribution is tiny compared to the heroic efforts of the youth club members who have put so much effort into raising awareness and funds and collecting food for their local foodbank. Hopefully nobody will need to use the services listed on the flyer this Christmas, but should they find themselves in difficulty hopefully the donated magnets will mean the information is close at hand.”

Attached is the flyer created by the youngsters from The Sulgrave Club. I’m sure you will agree, they’ve done a fantastic job. Should you wish to find out more about the work of The Sulgrave Club, contact Poonum Chamdal on 020 8748 3561 or follow them on Twitter @SulgraveYthClub. 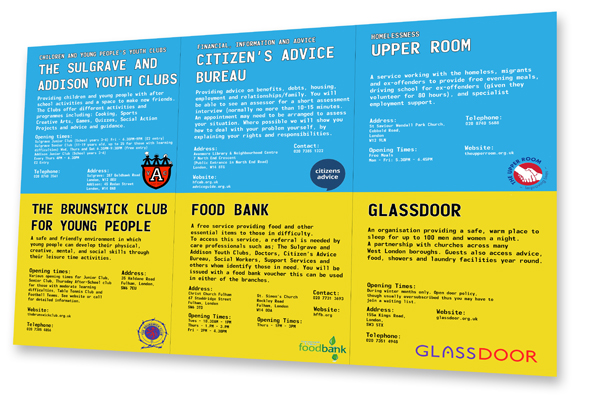