Mining has always been a dangerous job. It was particularly dangerous in the 1800s when miners had to carry naked flames to light their way, which led to many fatal explosions. Without doubt, one of the single biggest changes to improve safety for miners was the invention of the safety lamp; an invention which no doubt saved hundreds of lives over the years.

After miners’ safety lamps were replaced in the 1930s by battery-powered helmet lamps they became obsolete, although some were still used to identify dangerous gasses into the 1970s and 80s. Following the closure of many of the UKs pits, these lamps were kept as souvenirs and are collected and cherished by many people.

Most safety lamps are kept for their ornamental value but many are still in working condition, although few owners know how to access the fuel reservoir of the lamp to refill it, to test if their lamp still works.

Safety lamps were purposefully made difficult to open so that miners couldn’t open them to relight them if they went out underground. This would have exposed the naked flame to dangerous gasses that were the cause of so many of the early disasters. Only the deputies who were responsible for safety had a lamp that could be re-lit underground. Below is a beautiful example of a deputy’s lamp.

The locking mechanism on regular safety lamps was consistent across most of the designs, and included a catch and two pins. The catch pivots on one pin while the other is spring-loaded so it can be moved, allowing for the hinged catch to open. The catch, known as the magnetic lock, is designed so that the spring-loaded pin can only be released by applying a strong magnet to the base. Traditionally, the men in the lamp room would light every lamp before handing them to the miners at the start of each shift. 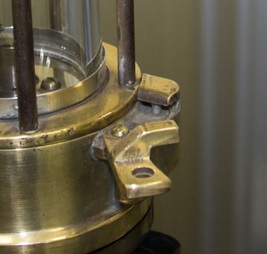 A close up of the magnetic lock on a miners’ lamp showing the catch arm and spring-loaded pin. 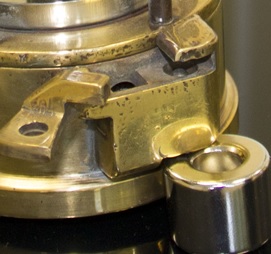 A close up of the magnetic lock on a miners’ lamp showing the catch arm and spring-loaded pin released using a strong magnet.

To release the pin, a strong magnet must be applied to the base and slowly moved downwards, this pulls the spring-loaded pin down into the catch allowing the catch to be opened.

A lamp owner from Chesterfield recently called us asking about what type of magnets he should use to release the catch on his pair of stunning miners’ lamps. He kindly brought his lamps down to our trade counter so we could make sure he got just the right magnet. We took these photos that show you were to place the magnets to open the catch.

The perfect magnets for the job turned out to be 25mm diameter x 20mm thick counterbored, neodymium magnets. Despite being relatively small, these magnets generate a strong magnetic pull, making light work of a miners’ lamp magnetic catch! 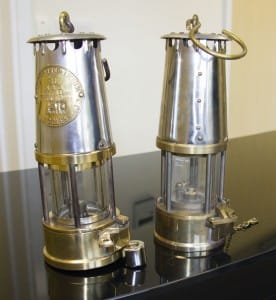 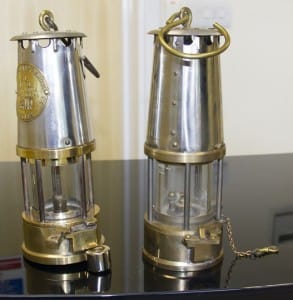