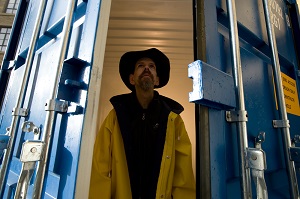 A shipping container arrives, the doors swing open and you are engulfed by a wall of beautifully crafted sound. For this is not an ordinary shipping container, it is the latest musical instrument crafted by inspirational and uniquely talented composer Jez Colborne. This is his Gift.

Gift is the name of the musical performance, crafted by Jez and made possible by Mind The Gap theatre, that transforms a steel shipping container into a makeshift musical instrument through a variety of unusual percussions, objects and routines. The performance, commissioned by PRS for Music Foundation’s New Music Biennial is currently touring the UK having started with a bang on 14 June, 2014 at the Bradford Festival before moving on to the New Music Biennial at the Southbank Centre on 6 July and finishing its tour as part of the Glasgow 2014 Cultural Programme, part of the Commonwealth Games.

Playing a supporting role, literally, are magnets supplied by first4magnets that are used to suspend long hollow cylinders inside the steel container which generate unusual sounds. 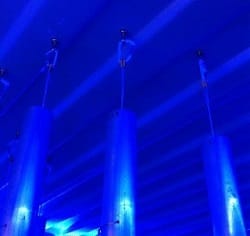 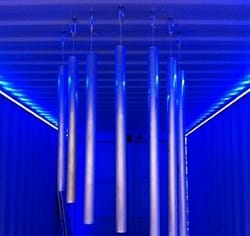 Matthew Ellis, Director of Sales at first4magnets said: “At first4magnets we have a lot of experience of working with theatre companies in the UK and abroad but this is easily one of the most creative examples of using magnets as part of a production that we have come across. Naturally, when Mind The Gap approached us, we were only too happy to assist.

“When Production Manager, Dave Searle, explained to us what they were looking to achieve it was a matter of simply recommending the right pot magnets for the job. We supplied a selection of magnets with hook and eyebolt attachments with excellent clamping force so they can withstand all the movement and vibrations inside the container!”

Speaking about Gift, composer Jez said: “I was struck with how odd a shipping container is, a big space that could be brutal and beautiful. I want to create a feast of sounds from it that liberates musical qualities from different cultures. The piece follows the story from Greek mythology of the Trojan Horse – a gift arrives, but is all what it seems? I want the audience to go through a mix of emotions when they hear the piece, from wary, confused, to elation and amazement. It will be 15 minutes of new and exhilarating music.”

Jez is a uniquely talented composer and musician and is the only artist selected for the PRS for Music Foundation’s New Music Biennial to have a learning disability.

At the age of seven months Jez’s family were told he would never be able to walk or talk. Diagnosed with Williams Syndrome, a genetic condition that brings some striking verbal abilities, perfect pitch and particularly – an affinity for music, he began making music before he could walk.

Practicing for hours, improvising and composing his songs Jez began working with Mind the Gap in 1997 engineering unusual sounds and composing them into final pieces. Now his creatively crafted pieces are toured all over the world and this year Gift is set to take the UK by storm.