Magnets and their starring roles

Magnets are everywhere. We have discussed this a lot in the past how magnets are used within our televisions and within the cameras used to film our much-loved movies. But have you taken a moment to realise that some of our favourite movies use and interpret magnets and their theories all the time?! Here we have delved into some of our favourite movies to discuss how magnets are portrayed. So, let’s get started! With our first movie, we recommend you play Monty Norman’s iconic musical piece to really get you in the mood…

Now who hasn’t dreamt about being a spy at least once in their life, or at least wanted to try out some of the classic spy moves and gadgets?! Well, did you know magnets play a starring role in the execution of these tricks and gadgets you see? An example of this is in the James Bond classic, You Only Live Twice. There is a scene where James Bond is being chased by a car full of gunmen, but to his rescue, he is saved by Tiger Tanka and her helicopter. She lowers down an electromagnet and picks up the villain’s car and drops them into the sea. This is an amazing on-screen stunt, but would it actually work in real life? This would be achievable, but the electromagnet would need to be super strong to be able to hold the significant weight of a car!

Another example is found in From Russia in Love, where Bond has a leather briefcase that performs various tricks. The case contains a magnetised tin of talcum powder concealing a tear gas cartridge. The tear gas bomb is triggered by the case being opened with the latches in the wrong position.

Watch the case in action below:

Moving on to more of our other favourite spy’s who also use magnetic theories to ‘perform’ their spy moves! In Mission Impossible: Ghost Protocol, the film uses the theory of magnetic levitation. In the film, Agent William Brandt wears a magnetic levitation suit that allows him to float through some tight passages to plant a device. Magnetic levitation is possible as we have seen within transport industries, which in turn would mean you could levitate the weight of a human. The only point to consider is the heat created from the superconductor needed to do this. This could cause a variety of problems to the person wearing the suit!

The film also shows Agent Ethan Hunt scale the world’s tallest building, the Burj Khalifa, with a pair of gloves! The stunt replicates a Spiderman-like manoeuvre. The technology behind this is called electro adhesion. Electro adhesion is the electrostatic effect of attraction between two surfaces exposed to an electrical field. An example of this is the static effect caused when you rub a balloon and it sticks to the wall.

Climbing walls must be a theme amongst spies! In the spy comedy classic, Johnny English Strikes Again, we see Agent English and Bough attempt to scale the side of a boat without being noticed, with the use of magnets in their magnetic boots. The scene goes on to reveal the boots strength, as on the other side of the wall we start to see ferrous materials being pulled towards the wall. The comedic scene results in the mission being a complete fail as the duo end up getting caught.

These two climbing theories were put to the test by MythBusters, where Adam trialled the Mission Impossible theory using vacuum powered suction cups, and Jamie trials the Johnny English magnet stunt. The duo was challenged to take it in turns to climb up an air duct and not be caught. They were monitored by their efficiency. Adam came into a couple of problems in the beginning but starts to slowly take lead until the grip of the suction begins to take its toll and he slips in the airduct resulting in him being BUSTED! Jamie struggled from the beginning, as soon as he attached himself to the duct the magnets clanged against the metal. The process is slow and was very hard to achieve the spiderman-like moves that we see in the movies. Jamie also failed the mission as the magnets were too loud, causing him to blow his cover. Whilst both methods worked in theory, they did not exceed the movie expectations.

Here is MythBusters Jamie in action:

Toy Story. Yes, that’s right, Toy Story! Our favourite childhood movie demonstrates how magnets are used within an industrial environment. In Toy Story 3, there is the iconic scene where we are led to believe that this is the end of the road for Woody and his friends, as the toys have found themselves trapped on a conveyor belt in a scrapyard. The conveyor belt is leading them towards a shredder… until Buzz notices bits of ferrous materials (including Slinky) are being pulled out and attracted to a magnetic ceiling. They all scramble to find some ferrous waste, to help them escape the shredder. It’s safe to say we definitely have to thank magnets for saving the day!

So, there we have it. The next time you sit down with your popcorn and fizzy drinks at the movies or at home, keep an eye out for magnets and the roles they play. If you do spot any, we would love to hear from you! Or if you have any questions or queries regarding magnets and their uses, feel free to drop us an email on sales@first4magnets.com or give us a call on 0845 519 4701 and our team will be happy to help. Thank you for taking the time to read our post and we hope you’ve learned a thing or two! 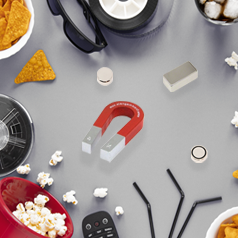 Article Name
Magnets and their starring roles
Description
Delving into some of our favourite movies and discussing how magnets are portrayed.
Author
Beth Twohig-Lawton
Publisher Name
FIRST4MAGNETS®
ElectromagnetsGadgetsmagnetic levitationmagnetsmoviesseparation magnetsspy