This site uses cookies to provide and improve your shopping experience. If you want to benefit from this improved service, please opt-in.
More Info
Save Preferences
FIRST4MAGNETS® | BLOG | THE WORLD OF MAGNETSMagnets & TechnologyWhat is a reed switch, and which magnets operate them?
Menu
Magnets & Technology, Physics, Technology

What is a reed switch, and which magnets operate them?

A reed switch is an electromagnetic switch used to control the flow of electricity in a circuit. They are made from two or more ferrous reeds encased within a small glass tube-like envelope, which become magnetised and move together or separate when a magnetic field is moved towards the switch. The switch effectively works like a gate, or a bridge, in an electric circuit so when the two reeds are in contact, electricity can flow around the circuit operating a device. Unlike mechanical switches they do not require something or someone to physically flick them on or off, they are controlled completely by invisible magnetic fields!

There are two fundamental types, ‘normally open’ and ‘normally closed’. In a normally open switch, the two reeds, which are made from ferrous material such as a nickel-iron alloy are positioned so that they are not touching. When a magnet is moved close to the switch, it pulls one of the reeds towards the other so that they are touching, and therefore completing the circuit. Remove the magnet and the reeds return to their original position breaking the circuit.

A normally closed switch works in the opposite way, when no magnetic field is present the reeds are in full contact, the electric circuit is complete and the device is ‘on’. When a magnet is moved close to a switch, or the switch close to a magnet, the reeds repel one another and split apart, breaking the circuit. There is a third configuration that has three contact points, rather than two. In this configuration, the current flows along a common lead which can be toggled between two contacts. The common lead will be in contact with one contact in its normal position until a magnetic field is introduced moving the common lead to be in contact with the other contact. When the magnetic field is removed, the common lead reverts back to its original position.

There are many advantages for using magnetically operated reed sensors, including:

What type of magnets are used with reed switches?

Without a magnet, a reed switch is redundant but introduce a magnetic field to the reed switch and the switch will spring into action. The size and type of magnet required depends entirely on the type of reed switch and how the reed switch is built into an assembly. Because a reed switch can be hidden or embedded within an assembly and still operated by a magnet, the distance between the magnet and the switch is all important. The wider the distance between switch and magnet, the stronger the magnet will need to be to interact with the switch. Any permanent magnet will work with a reed switch but it is important to remember that different materials have different strengths and different sized magnets produce different sized magnetic fields. Neodymium magnets are the strongest type of magnets commercially available, and therefore even tiny magnets can be effective. However, ferrite magnets, although much weaker, are popular because of the deep magnetic field that they produce. When selecting a magnet for a reed switch application there are several main factors to consider; shape of magnet, magnet strength, switch sensitivity, distance and angle between magnet and switch. Understanding how a magnet will influence a reed switch requires an appreciation of how a magnet’s magnetic field is formed. Although you can’t see the lines of magnetism, it is known that they flow from north to south along the shortest route without ever crossing each other, as seen by the bar magnet representation below.

Each reed switch has a number of ‘active’ regions surrounding it, sometimes referred to as lobes, the size of which varies depending on the sensitivity of the switch. The sensitivity of a reed switch is rated based on the magnetomotive force measured in the ampere-turns (AT) required to pull in or release the contact points. When a reed switch is manufactured, it is placed within a test coil with a specific number of turns of wire. As an electric current is passed through the coiled wire, it creates a magnetic field. A measurement is taken when the current passed through the coils is sufficient to actuate the switch providing the ampere-turns rating for each and every switch. One ampere-turn (AT) represents a direct current of one ampere flowing through a single loop of conducting wire. The term ‘turns’ refers to the number of turns of wire in a conducting coil. To calculate the magnetomotive force in ampere-turns produced by a current passing through a coil of wire it is necessary to multiply the direct current in amperes with the number of individual loops in the coil.

For example, a current of 5 amperes passed through a coil of 5 turns produces a magnetomotive force of 25AT. Choosing the right magnet for a switch can be confusing as the density of a magnet’s magnetic field is measured in Gauss or Tesla, not ampere-turns. However, more commonly, reed switches are supplied with a specification detailing the strength of field in Gauss required to switch them. If your switch only states the ampere-turns and not Gauss value it is possible to use the conversion of 1 Gauss = 1 ampere-turn but this is not an exact science and should only be used as a guide. The lower the AT rating or Gauss, the lower the magnetic field strength required to actuate the reed switch. It must be understood that the relationship between magnet strength, measured in Gauss, and switch sensitivity, measured in ampere-turns based on distance depends on the geometry of a magnet and the orientation of the magnet to the switch. Magnet shape and size has the greatest effect on the Gauss rating of the magnet. Furthermore, when a reed switch is manufactured and tested, the leads will often be longer than the final application requires. While these leads can be cut to the desired length, doing so reduces the amount of ferrous (magnetic) material in the switch and the sensitivity of the switch is decreased, meaning the magnet must get closer to the switch to activate it. At first4magnets, we label all our magnets with a Gauss (flux density) rating, measured from the centre of the surface of the magnet using a Gaussmeter. The flux density decreases exponentially over distance as per the below example of the flux density of a 10mm diameter x 5mm thick neodymium magnet over distance.

Where are reed switches used?

Reed switches are primarily used for proximity and sensing applications and are more common than you may realise. Here are some everyday uses of reed switches:

Alarm systems – A reed switch will be found in many alarm systems for sensing whether doors and windows are open or closed. They are also used to make systems tamperproof by placing either magnets or switches in covers so when they are removed, it actuates the switch triggering the alarm.

Laptops – Ever wondered how your laptop or tablet knows how to switch on or off when the screen is lowered or the cover is placed over the screen? This is reed switches and magnets in action – due to the interaction of the switch and magnet, the device knows the proximity of the cover or screen and reacts accordingly. 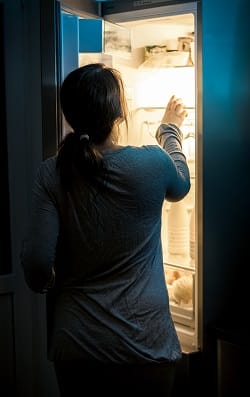 Safety – Have you ever found that some devices, such as food processors, won’t turn on unless a lid is shut or other safety precaution has been taken? This is proximity sensing reed switches in action.

Automotive – So many safety and sensing applications in your ever-smart car rely on reed switches. Just a few sensing uses include impact, speed, braking, door positions, fluid and fuel levels,

Refrigerators – Modern refrigerators use reed switches, rather than mechanical switches to detect when the door is open or shut. As a the door is shut, a magnet in the frame of the door is moved close to a fixed reed switch and the magnet forces the reeds apart, turning the light off.